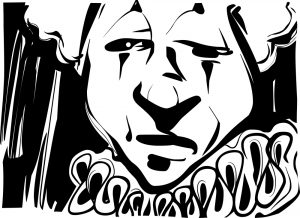 Mr. Custard is angry.  He is; he’s pissed off.  It would seem that an inherited career as a mediocre children’s entertainer, a tepid marriage and two teenage children (who are apparently indifferent to him) have tipped him over the edge. Frankly, he couldn’t care less if the birthday boy wants a balloon animal.  After all; nobody gets what they want, in the end.  Following a ‘red mist moment’, wherein he head butted the birthday boy’s father, upturned the Spiderman birthday cake and called the mother an unmentionable; he is narrowly avoiding a custodial sentence by attending a weekly self-help meeting entitled ‘What’s there to be so cross about anyway?’.

Joining him to work through their ‘negative self-talk’ are; Gary Windmill – a dejected secondary school teacher, Lilly – an elderly lady who obsessively knits jumpers with inappropriate slogans and Amanda – who’s lost the use of both her legs in a car accident.  Amanda isn’t angry, actually.  But everyone thinks that she should be.  And lest we not forget Sandy, the group leader, who seriously believes that concentrated breathing exercises and counting to ten, will work.

Is making it through one day, without feeling as though you might attack a complete stranger in the street, too much to ask?  Is it unreasonable to want to go to the supermarket and actually pay for your goods rather than involuntarily collapsing into an hysterical, dribbling (somewhat soggy) mess at the till? Ultimately, isn’t everyone just desperately looking to make a connection; and I’m not talking about fist to face here, just to connect. Doesn’t everyone want to have another human just understand what it is to be you? Thought not. Best get the punch bags out then.